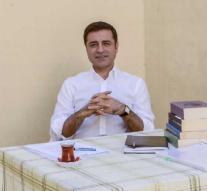 ankara - A Turkish court sentenced the former head of the pro-Kurdish opposition party HDP to a prison sentence of more than 4 years. Selahattin Demirtas, one of Turkey's best-known politicians, was said to have committed terrorist propaganda in 2013, CNN Turk said.

The court also sentenced former HDP parliamentarian Sırrı Süreyya Önder to a prison sentence. He received 3.5 years based on the same accusations. Demirtas has been in custody for 23 months. He is also accused of many other criminal offenses.

Both Demirtas and the HDP have denied having ties with the banned PKK movement. The authorities hold that organization responsible for numerous attacks. Demirtas took on the presidential election this year from prison against President Erdogan, but received only 8.4 percent of the votes.