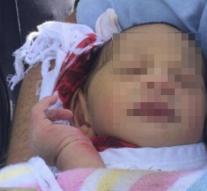 sydney - The 32-year-old Australian woman who dumped her newborn baby in a sink hole in 2014 was sentenced to 21 months in prison. Only five days later, the boy was found, and miraculously he was alive.

Because the woman much of the sentence has been served already in custody, she will next month already free.

Cyclists discovered the baby when she heard cries coming from a drain. When the police lifted the lid she discovered the baby 2.5 meters lower. He was severely dehydrated, hypothermic, malnourished and wounded, but still alive. We later found out that he had been there a long time located.


During the trial it became clear that was leaving the retarded woman by her friend and was too late to have an abortion. Fearing the reaction of her deeply religious family, for whom she had kept her pregnancy secret, she decided to dump the child shortly after birth in the well.

Twice the woman went to look at the pit along the highway at Sydney, but because she heard no crying, she assumed the child was deceased.

According to the judge's wife because of her impaired mind power not entirely sane. The fact that she played instantly confessed guilt along to give her a lighter sentence. Risk of recurrence is small, the judge thinks.


The 'miracle baby' has been 20 months and is developing well, according to Australian media. He was placed with a foster family and is well monitored.