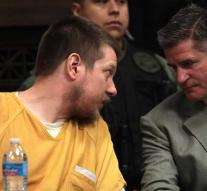 chicago - A white cop in Chicago was sentenced to almost 7 years in prison on Friday after being found guilty of murder last year for killing a black teenager in 2014.

Seventeen-year-old Laquan McDonald was struck in 2014 by sixteen bullets from agent Jason Van Dyke's gun. The incident was filmed with a dashboard camera in one of the police cars. It shows how the agent keeps shooting after the boy was already lying on the ground. The death of McDonald led to massive demonstrations against police violence.