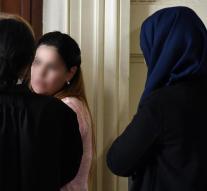 brussels - On Friday, members of a Prince family from the United Arab Emirates in Belgium demanded conditional sentences of one and a half years. They stayed for a couple of months in a Brussels hotel in 2008 and would have exploited 23 female staff in a manner similar to slavery.

The Public Prosecutor requested 15,000 euros fine per victim. With interest this would total a total of 1.9 million euros.

For the Brussels court this week there is a princess, seven of her daughters and a courtmaster for human trafficking. They are not present. Their staff had no work and residence permit and were not or hardly paid.

The defense prompted acquittal because a company that contracted the victims would be responsible for the practices at the then Conrad hotel.