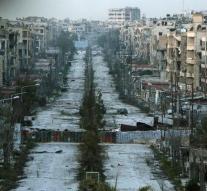 aleppo - The cease-fire in the Syrian city of Aleppo is extended by 72 hours. According to the Syrian state news agency SANA, the Russian Defense Ministry confirmed this. The regime of silence, 'as the fragile truce is called, includes the northern coastal province of Latakia, starting on Saturday night 1 pm (local time).

Since Wednesday, there is a cease-fire in Aleppo. Latakia silence the guns since April 29, after an extended truce was broken for western Syria. The United States and Russia, respectively, to support the opposition and the Syrian government, are closely involved in the negotiations for the cease-fire.