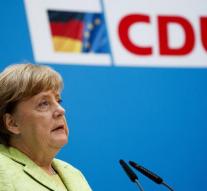 dusseldorf - The CDU of Chancellor Angela Merkel suddenly took a small lead in the polls shortly before the state elections in North Rhine-Westphalia. That is bad news for the Social Democratic SPD, which suffered two defeats earlier this year.

In Germany, the state election of next Sunday is monitored closely. The ballot box is a measure of the national election in September. North Rhine-Westphalia (NRW) adjacent to the Netherlands is strategically important: more than 13 million people vote in the state.

The board of the state is currently led by a prime minister of the SPD, Hannelore Kraft. However, from a representative survey by YouGov, it appears that there could be a change in this situation. 31 percent of respondents preferred the Christian Democratic CDU, as opposed to 30 percent for the SPD.

A defeat in NRW would be a blow to national SPD leader Martin Schulz, who himself comes from the state. The former President of the European Parliament is in charge of chancellorhood, but has yet to show that he has been opposed to Merkel. His party recently resigned against the CDU in Schleswig-Holstein and in Saarland.