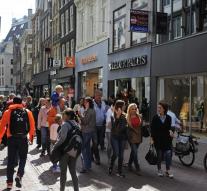 - Via wifi signals may still be measured in the crowds shopping per hour, but the retention of this data is limited to 48 hours. Bluetrace, a company that sells visitors, customers can therefore not tell you how many times someone a month has passed. Moreover Bluetrace must inform shoppers beforehand, for example by stickers on shop windows. The latter had failed Bluetrace.

This was reported to the Dutch Data Protection Authority (CBP) DNA research at the company. Bluetrace mainly large electronics chains and phone shops as customers. Who want to compare the crowds in the street with the run-up in the store. In addition, the customer remains anonymous. Major retailers can see which stores are performing less.

Furthermore Bluetrace its tracking systems can not run 24 hours a day. Feike Liemburg (blue trace) is not necessary.

An examination of the CBS show anywhere that the anonymity of the customer Bluetrace is at stake. The Company only records the MAC address unique to a particular phone. This ' mark' a mobile phone, however, is only in theory traceable to one person. In the process of Bluetrace people are followed without knowing who it is. Still, CBP believes that infringement is done on a person's privacy.

According to the Leiden professor Gerrit-Jan Zwenne has WBP far shown that shoppers are identified. Bluetrace denies this too strongly. Zwenne thinks that the concept of the CBP identification does have very stretched. He thinks that CBP goes beyond its powers because the Data Protection Act (PDPA) does not apply here.

Christiaan Alberdingk Thijm, privacy expert at Bureau Brandeis, the same opinion is shared by. " The regulator has with this ruling would set an example. Bluetrace collected include MAC addresses of mobile phones. The privacy watchdog finds that a person given. " The question is whether that data can be traced to individuals. "A lot will be resolved by alerting shoppers for wifi tracking. " You'll get a sign in the shop, similar to CCTV. In practice, WiFi tracking much less worrisome than CCTV, "concludes Alberdingk Thijm.

Incidentally, not limited to the following phones into Wi- tracking. When Bluetooth tracking the customer gives his anonymity or price, but that happens with their express consent. This is only possible if an app from a particular store (chain) is installed on the smartphone. Who does not want to be tracked via wifi, this signal can also turn off. However, few people take the trouble.