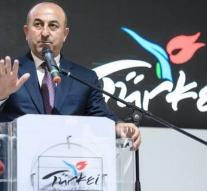 bern - Switzerland has no problem with the arrival of Mevlüt Cavusoglu is to make propaganda for the referendum in April. The Turkish Foreign Minister will speak Sunday in Zurich voting compatriots.

The security committee of the Swiss government saw according to media Thursday no reason for him to prohibit due to 'an extremely dangerous situation. 'Zurich is there less assured.

Cavusoglu, according to the Neue Zürcher Zeitung intends to intervene in the Hilton Opfikon in the presence of Turkish consuls in Switzerland and Austria. The hotel management did there because of all the commotion in Germany and the Netherlands from safety reasons. Police also had concerns.