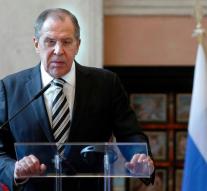 moscow - The development of North Korea's nuclear program should not be used as an excuse to trigger the US missile defense system already. This opinion is granted to Russia and China, according to the Russian Foreign Minister, Sergei Lavrov, Friday.

The US has stationed the missile defense system (THAAD) in South Korea to defend the country against enemy projections from the north.

According to Lavrov, Moscow and Beijing are working together on a number of measures to stop North Korea's nuclear program. At the same time, the countries do not want 'political colonization' in the region. 'The presence of America on the Korean Peninsula can only exacerbate the tense situation with North Korea,' said Chinese Foreign Minister Wang Yi.

Russia and China expressed the hope that North Korea in turn respects the United Nations resolutions. For example, according to resolution, the country can not do missile tests.