Home / World / Caught in the cold 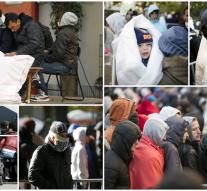 - At temperatures approaching the freezing point , stays in Germany thousand asylum seekers in tents that are not calculated it . According to German media, the at least 42,000 people are housed in tents by the Länder.

The people are on a fixed key distributed among the states.