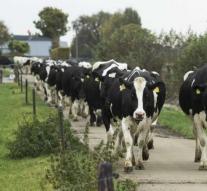 utrecht - Dutch cattle herd has to cut by 40 percent to reach the climate targets of Paris by 2030. That means that in the Netherlands in 2030 there are only 1 million dairy cows and 3,4 million pigs. Also, the number of chickens must be reduced by one fifth, Nature \u0026 Environment has calculated in a Tuesday-published Food Vision.

In this, the environmental organization has calculated what the Dutch food sector needs to do to comply with climate change agreements.

The food sector is according to Nature \u0026 amp; Environment responsible for a quarter of Dutch CO2 emissions. According to the climate agreement, emissions must be reduced by almost half within thirteen years. In the Food Vision, Nature \u0026 amp; Environment a lance for rapid agriculture sustainability. According to the organization, it is best to bring back the number of animals responsible for the production of greenhouse gases. A cow pushes just as much as a car annually, according to the organization.

The Food Vision states that one third of farmers expect to stop in the coming years. When the government buys the animal rights of those farmers, the livestock will be reduced by itself. The farmers who continue their business will continue to earn a good income in that scenario. Furthermore, there is more space for arable farming, horticulture and new crops, such as groceries.

The emphasis will be on quality rather than quantity. 'The time we produce high and cheap food is soon over,' says Geertje van Hooijdonk, Director of Nature \u0026 amp; Environment.