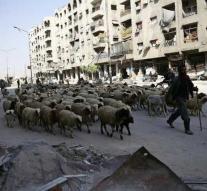 amman - The authorities in the rebel town of Douma in East Ghouta are struggling with the influx of refugees. Thousands of displaced families reside in streets and parks due to lack of space in cellars and other shelters, the city council warns, which speaks of a 'catastrophic' situation.

There would be a shortage of food in the city. The dead are no longer buried because of the ongoing air attacks, according to the local administrators. Residents of East Ghouta have recently fled massively for the battles between pro-government troops and rebels.

The Syrian government wants to regain possession of the rebel stronghold of East Ghouta, close to the capital Damascus. The offensive is accompanied by heavy bombing and artillery bombardments. The violence in the enclave has cost the lives of at least 1100 civilians since mid-February, according to the Syrian Observatory for Human Rights.