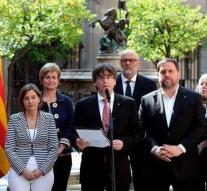 barcelona - Catalonia wants to hold the referendum on Spain's split on October 1st. This was announced by the President of the Carles Puigdemont Autonomous Region on Friday, according to the Spanish newspaper El País. According to Puigdemont, the government's approval in Madrid, which has to be approved by the parliamentary assembly, is not calculated. Whether the referendum actually takes place is the question.

Do you want Catalonia to become an independent state in the form of a republic? If it is on Puigdemont, the question will be answered during the referendum. The president of the region sees the public consultation as a last straw, as the Spanish government of Mariano Rajoy 'does not want to cooperate on a real and thorough solution. '

Should the government in Madrid stop the referendum, then Catalonia has a plan B. The region would secretly work on a law for the separation of Spain and want to implement it immediately after a 'no' of Madrid.