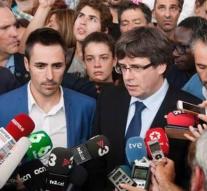 barcelona - The Catalan government leader Carles Puigdemont said on Sunday evening after the controversial referendum that a doorway for Spain was opened. 'On this day of hope and suffering, the citizens of Catalonia have acquired the right to an independent state in the form of a republic,' said the Prime Minister, surrounded by cabinet members.

'My government will send the results of the parliamentary debate to the Catalan parliament one of the coming days, where the sovereignty of our people lies, so that it can take action in accordance with the referendum legislation. 'This allows the regional parliament to unilaterally rule independence if the majority vote for the divestment of Spain.

A first poll indicates a clear victory of the yes camp. The constitutional court and the government in Madrid have declared the referendum illegal.