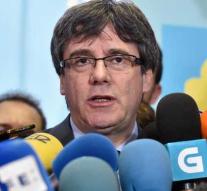 barcelona - The parliament of the Spanish region of Catalonia chooses a new regional prime minister on 30 January. The parliament said that in a statement on Thursday. The only candidate at the moment is Carles Puigdemont, the ex-premier who has fled to Belgium and is still living there.

Under the direction of Puigdemont, the region kept a controversial referendum on independence from Spain, despite a ban from Madrid. When a majority of the Catalans turned out to be independent, the parliament proclaimed independence. The central government in Madrid responded by eliminating the regional government and issuing new elections. Puigdemont fled to Belgium together with a few ministers.

The new elections proved to be no solution. Separatist parties retained their majority.