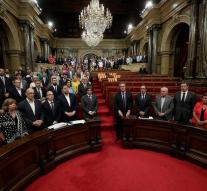 madrid - The parliament of the Spanish region of Catalonia agreed on Wednesday to hold a referendum on independence of Spain.

The Spanish government has already come to the top judges of the country on the referendum, which should be held on October 1.

A majority of the Catalan parliament was for the law that allowed the referendum. The regional government of Prime Minister Carles Puigdemont, together with his small coalition partner, has a majority seeking independence.

Deputy Prime Minister Soraya Saénz de Santamaría said Wednesday that the national government has asked the constitutional court to declare the referendum invalid. The Spanish law does not allow part of the country to separate itself.

Separatist politicians organized an official referendum on independence for three years. But only showed up. About 80 percent of the voters then voted for separation from Spain, but only 2.3 million of the proposed 5.4 million voters cast a vote. In recent polls, there are more Catalans who reject divorce than Catalans who are there.