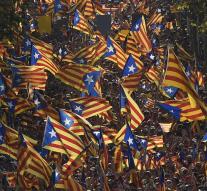 barcelona - The Catalan parliament will Monday begin a process to separate the region of Spain. The deputies of the regional parliament in Barcelona wish to do so to adopt a resolution which the official beginning of the establishment of an independent state should mark.

The separatist alliance Junts threshold Si (Together for yes) of Catalonia Artur Mas Prime Minister and the Left Party CUP have agreed on a common text. Both parties have a majority in the regional parliament.

However, the central government in Madrid has already announced such a resolution will immediately challenge through a constitutional complaint.