Home / World / Catalans: We do not come with another reaction 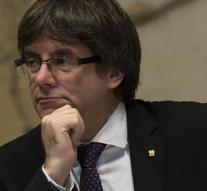 madrid - Madrid does not have to count on a new reaction from Catalonia on Thursday. 'We're not coming Thursday with anything else we've given Monday,' said a spokesman for the Catalan authorities.

The Spanish government claims that Catalan leader Carles Puigdemont has simply stated 'yes' or 'no' if he has declared independence. He has so far failed to do so. Madrid imposed him a deadline at 10:00 on Thursday morning.

Puigdemont sent a letter to Madrid in which he called for consultation. That led to a frustrated reaction by the Spanish government on Monday. 'The question was clear. The answer is not ', complains Minister Rafael Catalá (Justice).

The Spanish Constitutional Court announced on Tuesday that the legislation behind the independence report in Catalonia had been annulled. The court had previously frozen the Catalan referendum Act, but that did not prevent the authorities in the region from continuing the referendum.