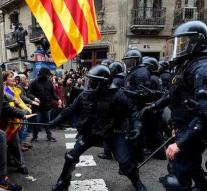 barcelona - Thousands of Catalans took to the streets in Barcelona on Sunday to protest against the arrest of former leader Carles Puigdemont. He was arrested after entering Germany from Germany because of an international arrest warrant issued by Spain.

'We demand from Germany that it does not extradite Puigdemont to Spain for breakup that was invented on political grounds,' said a spokesman for the separatist movement ANC that organized the protest.

Puigdemont is wanted in Spain for a series of offenses committed when he, as the regional prime minister, wanted to separate Catalonia from Spain in October with an illegal referendum. The separation was not only contrary to Spanish law, but also with rules of the Catalan parliament.