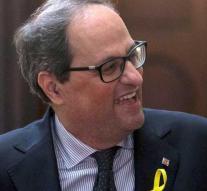 Former Prime Minister Carles Puigdemont has put Torra forward as a candidate on Thursday-evening. Catalonia is without prime minister since Puigdemont went into exile after the illegal referendum on independence. The separatist leader is currently in Germany, where the judge has to decide whether he can be extradited to Spain.

If Torra receives insufficient support on Saturday, a new voting round can be held on Monday. The Catalan politicians have until 22 May to form a regional government, otherwise regional elections have to be held.