Home / World / Catalan parliament has not yet met 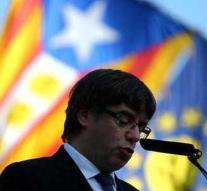 barcelona - The Catalonian parliament president Roger Torrent has postponed the session meant for choosing a head of government for the Spanish region. At first, Torrent wanted to have Carles Puigdemont, who had been deposed in October, elected prime minister again.

Spanish supreme judges have determined in the weekend that the Catalan Prime Minister should be present. But Puigdemont went to Belgium at the end of October. In Spain he is wanted for a series of offenses committed when he, as the regional prime minister, wanted to separate Catalonia from Spain in October with an illegal referendum.

This separation was not only contrary to Spanish law but also to the rules of the Catalan parliament. However, the elections held in Madrid in December did not change the balance of power in the Catalan Parliament. The separatists have acquired a small majority in the parliament of 135 seats with less than half of the votes, as in 2015. Torrent is from the separatist party ERC.