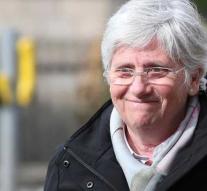 edinburgh - The former Minister of Education of the Spanish region of Catalonia has signed up with the Scottish police. Clara Ponsati, like the former leader Carles Puigdemont and a few other ministers, is wanted by the Spanish justice because they proclaimed independence from Catalonia.

Ponsati is also a professor at the University of Scottish St Andrews. According to eyewitnesses she came to the Edinburgh police station in the company of her lawyer. A Scottish judge will decide later on Wednesday whether she will be released on bail. Ponsati will challenge her extradition.

Puigdemont proclaimed the independence of Catalonia last year. He fled with four ministers to Belgium when the central government intervened in Madrid and took over the authority in the region and sidelined the parliament. Ponsati was probably already in Scotland then.