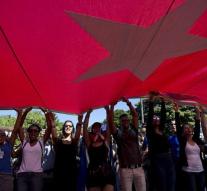 havana - Tens of thousands of Cubans Fidel Castro Monday proven their last respects. The crowd gathered early in the Revolution Square with the monument of national hero José Martí. At the memorial ceremony were 21 gun salute in advance.

In long lines of people walked past a huge picture of the young Fidel in fatigues, with backpack and rifle over the shoulder in the distance staring. Although the former dictator by no means was loved by everyone, the tears seemed to have been wiped away really.

The former leader, who ten years ago disappeared from the center of power by a deteriorating health, died Friday at the age of 90. A day later, he was cremated. The Cuban authorities have declared a mourning period of nine days.

The urn with his ashes this week will go around the country with the endpoint Santiago de Cuba. Since 1959 began the triumph of Castro and his rebels. Sunday he is buried at the local cemetery Santa Ifigenia