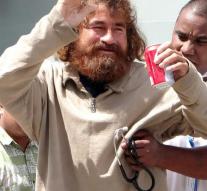 - A fisherman from El Salvador which bobbed around after a shipwreck 438 days at sea, is being sued by the family of the man he ate to survive.

The family of Ezequiel Córdoba, a few months after the shipwreck would be deceased, demanding $ 1 million of Jose Salvador Alvarenga, report media in El Salvador. Alvarenga denies having eaten the man.

The fisherman was the Pacific pushed by storms in November 2012 and then floated over there a year around in a tiny boat before people knew to save him. He kept all the time in life by turtles, fish and birds to eat. If it did not rain too long, he was drinking turtle blood.

Presumably his fellow traveler could not stand the raw food where Jose and he is trying to keep them alive. He died after a few months.

Only in 2014 Jose was noted near the Marshall Islands. He put in all that time more than 13 000 kilometers.