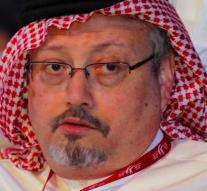 istanbul - The Turkish police will search the home of the Saudi consul in Istanbul on Tuesday. This is a day after the police searched the Saudi consulate for nine hours. According to reports from Turkish media, detectives also return Tuesday at the consulate for further investigation. The consul general himself, Cemal Kasikci, has not yet been questioned.

The police are investigating what happened to the Saudi journalist Jamal Khashoggi. He entered the consulate on October 2 and has never been seen again. The Turkish authorities claim that he was tortured and murdered in the building. Saudi Arabia has contradicted that, but would now discreetly acknowledge that something went wrong with a Khashoggi interview in the building.

Khashoggi is a resident of the USA where he also worked for The Washington Post. He voiced a lot of criticism of the Saudi ruler, crown prince Mohammed bin Salman. With his father, King Salman bin Abdulaziz al-Saud, Tuesday, US Secretary of State Mike Pompeo is visiting to talk about the Khashoggi affair.