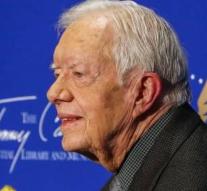 'He would like to meet Kim Jong-un and talk about a peace agreement between the United States and the North, and about a complete nuclear disarmament in North Korea,' said Park against the South Korean newspaper JoongAng Daily. 'He wants to use his experience to prevent a second Korean war. '

Carter's previous comments about North Korea caused wreck in the White House, which he would have asked him to stop talking about the issue last month because Donald Trump would undermine that. Carter's search for peace does not rhyme with Trump's rigorous set-up, who wants more sanctions against Pyongyang and threatens military action.