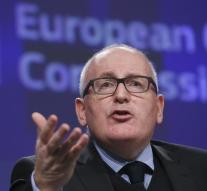 brussels - The Polish government again receive a warning from Brussels for violating the European standards for the rule of law. According to the European Commission, there is still no separation of powers in the country and the situation under the government of Prime Minister Beata Szydlo only gets problematic.

Vice President Frans Timmermans said Wednesday in Brussels to Warsaw two months, the time to respond. He has been a year in a 'dialogue' with Poland engaged inter alia the Constitutional Court. Tuesday Przylebska Julia, a member of the nationalist ruling party Law and Justice was (PiS), was appointed as interim president. Moreover unwelcome media are increasingly restricted.

Carpenter close further steps, such as never previously initiated proceedings to suspend the voting rights of a Member State, does not matter. But before the support of all member states is needed.