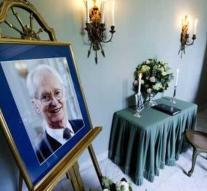 - The carlists, the Spanish movement that Prince Carlos, born and living in the Netherlands, regards as the rightful occupier of the Spanish throne, will remember Friday during a mass in the San Fermin de los Navarros church in Madrid on the death in August 2010 of 'king Carlos Hugo '.

According to the carlists, Juan Carlos did not claim the Spanish throne in 1975, but his rival Carlos Hugo, who was married to the Dutch princess Irene at the time. The Spanish judge Francisco Franco, however, decided differently a few years before his death, and appointed Juan Carlos as his successor.

The grandfather of Juan Carlos had also been the last reigning king of Spain. The claims of the other family branch date from the nineteenth century, when the succession to King Ferdinand VII did not go as his brother Carlos wished. Ferdinand had changed the law so that his daughter Isabella could succeed and Carlos resisted with force.