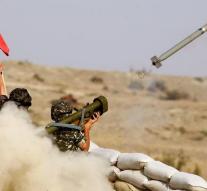 caracas - The Venezuelan Armed Forces have five thousand portable air missiles (MANPADS). This is evidenced by a military document that was viewed by the press agency Reuters. Experts fear that the weapons can be caught in the wrong hands.

The Venezuelan arsenal is presumably largely from Russia. The missiles were purchased during the reign of former President Hugo Chávez, who died in 2013. Meanwhile, the country is in chaos. Diving regularly reports about army and police officers stealing weapons.

Both experts and the United States are deeply concerned about Venezuelan air missiles. Washington has been funding efforts for decades to dismantle MANPAD arsenals in unstable areas, fearing that extremist movements can take care of the weapons.

That scenario is not unthinkable. The Colombian authorities took possession of internal documents of guerrilla movement FARC in 2008. It could be concluded that the organization with Venezuela had discussed the possibility of winning MANPADS. It is unclear whether that has actually happened.