Home / World / Cardinal to the judge for child abuse 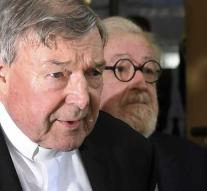 melbourne - The Australian Cardinal George Pell, the former treasurer of the Vatican, must stand trial for child abuse. That is what the court in Melbourne determined on Tuesday.

The 76-year-old Pell was one of the most important advisers to Pope Francis until last year and was considered the third man in the Catholic Church. Pell is accused of various abuse cases from the seventies and nineties. The cardinal himself denies.