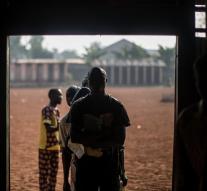 - A referendum in the Central African Republic (CAR) has unsettled Sunday morning started. In some neighborhoods in the capital, Bangui, people can not go to the polls because of shootings.

Residents of the CAR could vote on a new constitution. The referendum will pave the way for presidential and parliamentary elections in late December. If the constitution is adopted, for example, there is a Senate and establishes that members of the interim government not to participate in the coming elections.

The elections of 27 December to bring an end to the bloody conflict in which the CAR since early 2013 has been engaged. Rebels of the Muslim minority seized when the power in the country where the majority is Christian. The outbreaks of violence between Muslim rebels and Christian militias have cost thousands of lives.

Earlier this year, an interim government was appointed in the CAR. Which prepared the elections and the written constitution. Pope Francis urged the government of the CAR two weeks ago, to be set up for peace and unity.