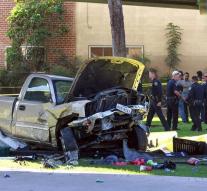 - A motorist was dumped down in the US San Diego with his pickup truck from the Coronado Bridge and landed on a partying crowd. There are four dead and eight wounded, one of whom seriously injured.

The car was twenty meters down and landed on its side on top of four people. The Chicano Park were about a hundred people attended a festival. Part of the crowd then helped to straighten out the car. According to local media, was arrested the driver, he is suspected of having driven under the influence of liquor.