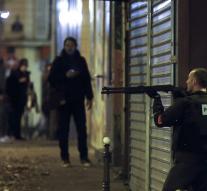 - One of the cars that the terrorists Friday in Paris used for the attacks would have a Belgian license plates. This was reported by the French newspaper Le Monde, said the Belgian news agency Belga Saturday.

Le Monde shows a female witness to the word which speaks of two black cars, one with a Belgian number plate. She estimated the age of one of the occupants of the cars at no more than 18 to 20 years.