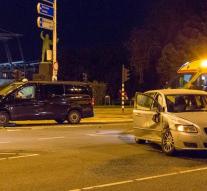 amsterdam - A passenger car collided with a taxi bus in the night of Sunday on Monday at the Nassauplein in Amsterdam. In addition, seven people were injured.

The accident happened at 04. 10 am. The passenger car drove up the Nassauplein from Nassaukade, but saw the taxi bus coming from the right. At the time of the accident the traffic lights were out of order.