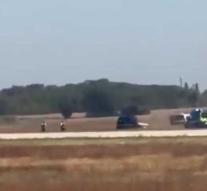 lyon - Air traffic at Lyon airport is stopped after a person in a car tried to reach the runway. On images that come out via social media, you can see that the driver is leaving the car and is fleeing on foot. Agents know how to grasp the intruder in the collar.

It is still unclear what the driver was moving. The car drove through two glass entrance gates at Terminal 1, an arrivals hall. The driver drove straight through the hall to the runway, but does not seem to have touched people. The car also hit a barrier during the wild ride.

On image it can be seen that the white car is subsequently chased by several police cars. The fleeing driver drives through a deep pit at high speed and then comes to a standstill next to the runway and continues on foot. For a long time his flight does not last anymore.

The images below seem to be filmed from a device that was ready for departure.