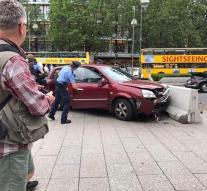 berlin - A car was driven on a concrete block on the Breitscheidplatz in Berlin on Saturday afternoon. It happened exactly in the same place on 19 December 2016 when a truck was attacked. Whether this is an attack is not yet clear. Two people were detained and the police launched an investigation.

Last December, a truck drove on visitors to a Christmas market in Berlin. During that attack, twelve people were killed. The car drove tens of meters across the pedestrian zone.