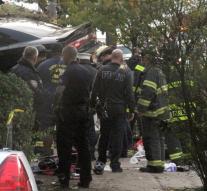 - At least three people were killed Saturday in New York when they went through the doors for ' trick or treat '. A motorist lost control of the steering wheel and drove a group of children and their parents, write American media. One of the dead is a ten year old girl.

The accident happened in the district of The Bronx. The driver ended up with his car on the sidewalk in a front yard. One of the victims died immediately, the girl of ten and a 21- year-old man deceased at the hospital. In addition, four people were injured. A girl of three is in critical condition in hospital. A 21 year old woman and another girl is out of danger.

How the accident could happen is still unclear. The 63-year-old driver may become unwell. He is wounded to the hospital.