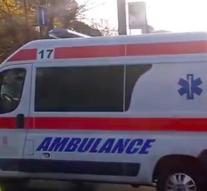 belgrade - In the south of Serbia is a car accident which was crammed with migrants. Two Afghans were killed and ten others were injured when the car hit Thursday in Nis on the road and ended up in the barrier. The driver of the car took off, according to the Interior Ministry.

Last year drew hundreds of thousands of migrants from the Middle East and Asia through Serbia and neighboring countries to Western Europe. After the Balkan route was closed in March, according to the Serbian authorities, an estimated 110 000 migrants pass through the country, often with the help of smugglers.