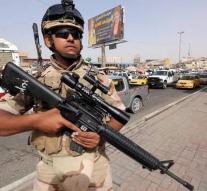 baghdad - At least eleven people died in the night of Monday on Tuesday at a bombing in the center of Iraqi capital, Baghdad. There are several people injured. A car bomb exploded in the Karrada district. The authorities have put the environment down.

The attack has not yet been claimed. In recent months, the terrorist organization of Islamic State (IS) has hit the Iraqi capital of Baghdad several times.