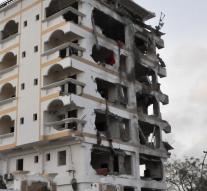 - By the explosion of a car bomb in a busy street in the Somali capital Mogadishu are at least three people have been killed. At least eight people were injured, police said. A local hospital said that 21 injured people have been brought.

There are many hotels and supermarkets. Most victims were walking on the street. The number of victims is rising almost certainly , a spokesman said. Immediately after the explosion was heard gunfire.

The terrorist group affiliated to al-Qaeda al-Shabaab has claimed responsibility for the attack. We were behind the blast , said a spokesman for al-Shabaab told Reuters. The terror group has often been attacks in Mogadishu. Its aim is to topple the Western-backed government.