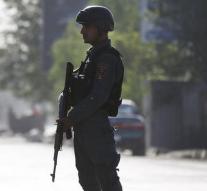 laskar gah - A car bomb at a bank in the Afghan city of Lashkar Gah has costed lives to dozens of people on Thursday. The bomb exploded at the entrance of the bank, at which time there was a line of civilians and soldiers who got their salary.

According to a spokeswoman for the governor of the Helmand province, there were at least twenty deaths to be regretted and about fifty were injured. The attack has not yet been claimed, but in recent times similar acts of terrorism were often committed by banks by Islamic State or the Taliban.