Home / World / Captain Lifeline is allowed to travel to Germany 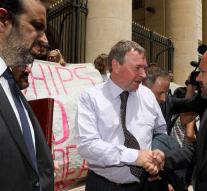 valletta - The captain of the Lifeline ship may leave Malta to visit his elderly mother (93) in Germany. The judge determined that Tuesday after the request of 57-year-old Claus-Peter Reisch. He remains suspect in Malta, reports the Times of Malta.

Reisch is accused of having gone into the sea with a previously unregistered ship. He had been released on bail early this month, but was not allowed to leave the country in anticipation of his trial.

The lifeline boat of the German aid organization Mission-Lifeline has picked up about 230 inmates from the coast of Libya and headed for Italy. But that country did not want to allow the ship in June, just like Malta. In the end, Malta agreed to allow the vessel to join other EU countries in order to accommodate migrants. The Netherlands is one of the countries that has promised to do so.