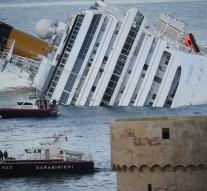 Francesco Schettino, captain of the disaster ship Costa Concordia, has had to turn the cell into action for the drama in 2012, involving 32 people. That has determined the court of cassation on Friday. Against the ruling it can no longer be appealed.

Schettino himself abandoned the passengers and his crew and left the ship in a lifeboat. It gave him the nickname 'Captain Lafaard'.

Schettino was found guilty of killing death in 2015, causing a shipwreck and dropping off the passengers. Against that decision he had been appealed twice.

The 56-year-old captain was allowed to wait for the verdict. The expectation is that he will disappear behind the bars on Friday.