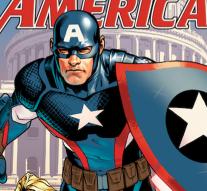 - Super Striphelden Captain America now has his own statue in New York. The approximately four-meter-high and 900-ton bronze monument was Wednesday (local time) unveiled in Prospect Park in Brooklyn neighborhood.

Many fans gathered at the statue and let there be photographed. Earlier, the image has already been seen on the strip exhibition ComicCon. Until the end of the year will see the monument at various locations in his Brooklyn, the borough where the comic legend ever arose. No decision has yet been taken about the final location for the monument.

The first comic book with the national colors blue-white-red-clad Captain America appeared in 1941, exactly 75 years ago. The stories around the superhero are also several times successfully filmed.