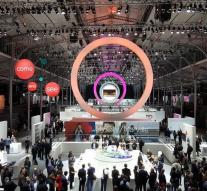 - Camera manufacturer Canon at its Canon Expo event in Paris on Tuesday several new camera innovations displayed. Amongst other is a camera with an ISO of up to 4 million , making it possible to shoot images in full HD in almost complete darkness.

The company also shows a prototype 120-megapixel camera that can take pictures with a three-dimensional texture. The idea is that this technique can be used in the future in combination with a 3D printer or hologram technologies.

Canon also shows his 250-megapixel camera sensor. The remarkable thing is that it has the size of a sensor which is also used in consumer cameras. The camera can take photos that are sharp up to 30 times faster than 4K video. Canon itself further allows also see an 8K camera, though this involves a concept and no real product.

Finally, the company shows Hdbook EZ. This is an app for smartphones that will be launched soon and a - according to Canon - intelligently seek out the best pictures for a photo album.