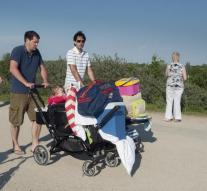 cannes - Cannes is no longer allow bathers with large bags onto the beach. Bags and cases that are large enough to transport weapons or explosives, is now taboo on the beach on the Cote d'Azur.

The decision of the council follows shortly after an announcement by the government that the so-called beach police, in charge of the rescue swimmers who get into trouble at sea, armed in part.

Cannes is not far from Nice, where on July 14, 84 people were killed by a truck.