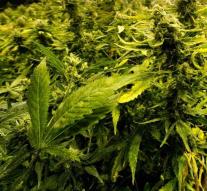 new - An employee of the Service (DJI) was suspended after it was discovered a small cannabis plantation in his home. That the Ministry of Security and Justice, where the service is subject, informed Friday after news of BN De Stem.

Police have arrested the man from the North Brabant village of Nieuw-Vossemeer (municipality Steenbergen) Tuesday. His wife was opgeakt.

The man works at the service Computerization of the DJI. He was previously Deputy Director of the Penitentiary Vught prison in Middelburg.

'The Public Prosecutor (OM) investigates him while walking to the ministry and the DJI say nothing about the matter,' a spokeswoman said Friday.

Besides his position at the DJI he is active in a Rotterdam foundation that helps addicts and within the Christian community of Steenbergen.

The hemp nursery was found on Tuesday. On Thursday, the Ministry of Security and Justice was not yet informed of his arrest. Friday, questions about the arrest were answered by BN DeStem.