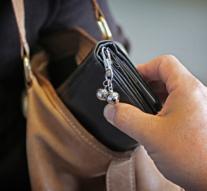 yokohama - A Japanese unemployed man was not just a loss for a job, but also to make money, so decided to put on courage. During an interview with the director of maintenance for elevators, he grabbed the wallet from the purse of the man.

'I wanted to work for the company, but because I had no job, I had no money,' the 24-year-old Shogo Takeda confessed, according to the newspaper Japan Times on the police. The director had called police after he noticed after the interview that his purse was gone.

The thief was easy to find. He had given the job his contact.