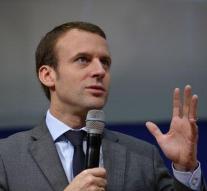 paris - The movement of the forthcoming French president, Emmanuel Macron, has so far found around 450 candidates for the parliamentary elections. The elections for the French Lower House, which counts 577 seats, are about one month. The new movement is called 'The Republic on its way! (Before: On the way!) And announced that Thursday all 577 candidates will be known.

But that is not possible because 'sensitive constituencies' need more time to make a choice from the overwhelming offer. French media reported that 16,000 people had signed up as a candidate. It is a huge job for the nine-member selection committee led by racial politician Jean-Paul Delevoye to make a choice.

Many candidates have signed up shortly after Macron won the presidential election on Sunday.