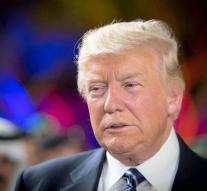 washington - A possible new setback for US President Donald Trump. David Clarke, his candidate for the post of Deputy Minister of Internal Security, appears to have plagiarized in his thesis on national security in 2013, writing for a master's degree at a military school in California. That is CNN reporting Sunday.

Clarke would have failed 47 times in his dissertation to apply the correct source listing. According to the rules of the school, that is plagiarism. The school announced an investigation into the errors in the thesis.

Clarke will be nominated this week in his new position. Whether this continues, is not known yet.